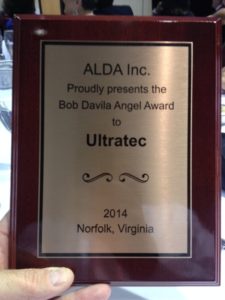 The Association for Late Deafened Adults (ALDA) has named Ultratec, Inc., the winner of its prestigious Robert R. Davila Angel Award at the association’s annual conference (ALDAcon 2014) in Norfolk, Virginia. ADLA is an association that supports the empowerment of people who are deaf or hard of hearing by providing education, resources, support, and an accepting community in which people who are late-deafened can thrive.

In presenting the award, ALDAcon Coordinator Katly Schlueter stated, “It is with honor and respect that the recipient of this award is given for their long unending support – asking for very little recognition in return. The recipient has stood steadfast with us in good time and bad, economically. ALDA is completely volunteer organization and our recipient recognizes our dedication to serving those with hearing loss and other disabilities. They continue to develop and create newer services. It is their time to be recognized. The ALDAcon 2014 Robert Davila Angel Award goes to Ultratec.”

“ALDA does a tremendous amount of advocacy work on behalf of people who are deaf, much of it behind the scenes and out of the spotlight. It provides critical resources to families and individuals who face the challenge and uncertainty of hearing loss,” explained Ultratec representative John Kinstler, who accepted the award on the company’s behalf. “We are privileged to help support ALDA’s efforts to make a real difference in the lives of people with hearing loss.”

The award is named in honor of Dr. Robert (“Bob”) R. Davila, a long time educator and respected member of the Deaf community who is a former Vice President of Gallaudet University and has served in the U.S. Department of Education, where he advised the President on disability issues.

Ultratec, Inc., is the leading developer of text telecommunications services and equipment that enable people who are deaf or hard of hearing to communicate over the telephone. Among the company’s numerous innovations is the CapTel® Captioned Telephone, which allows people with hearing loss to read word-for-word captions during their telephone conversations.